ASCO and IMS Health: Trends in the Cancer Care Market

Tomorrow kicks off one of the year’s largest oncology conferences: the American Society of Clinical Oncology (ASCO) Annual Meeting, held this year over June 3-7 at McCormick Place in Chicago. With over 30,000 attendees and hundreds of presenting companies, the conference will undoubtedly include important clinical data announcements from the likes of Pfizer, Genentech, and others as well as give some smaller firms the opportunity to introduce novel oncology candidates. Amid the presentations and exhibitions, one topic in particular is expected to stand out: the costs of cancer care.

In ASCO’s third-annual State of Cancer Care in America: 2016, the organization notes that one of the greatest challenges in cancer care today are its “increasingly unsustainable costs.” Healthcare spending has been an area of contention for many years now, with cancer treatment continuing to be at the center. The latest statistics from IMS Health cite the total cost of cancer therapeutics and medicines used in supportive care as being $107 billion as of 2015, an 11.5% annual increase. By 2020, these costs are projected to exceed $150 billion according to IMS estimates or $173 billion according to ASCO. Perhaps unsurprisingly, costs associated with cancer care are rising more rapidly than in other medical sectors, due to greater demand from an aging population, the introduction of newer and pricier treatments, increased patient survival leading to a longer duration of treatment, and changes in healthcare insurance to shift more of the cost burden to patients.

With prescriptions for new cancer therapies routinely running over $100,000, as many as 72% of Americans view the prices of prescription drugs as unreasonable—a sentiment that is shared by oncologists who have spoken at ASCO in the past. However, patients today also have better treatment options than ever before. The combination of new immunotherapies with targeted therapies (which could double or triple the price) increase efficacy and decrease the safety and toxicity concerns that have plagued conventional chemotherapy drugs. Over the past decade, a combination of prevention efforts (e.g., smoking cessation, healthier lifestyles), better and earlier screening methods, and more effective treatments has contributed to an average 1.5% decline in cancer mortality each year, for all cancers combined. Declines in mortality rates are even higher than average in four of the most common cancers—breast, prostate, lung, and colorectal—each of which has seen multiple new drug launches over the past five years. 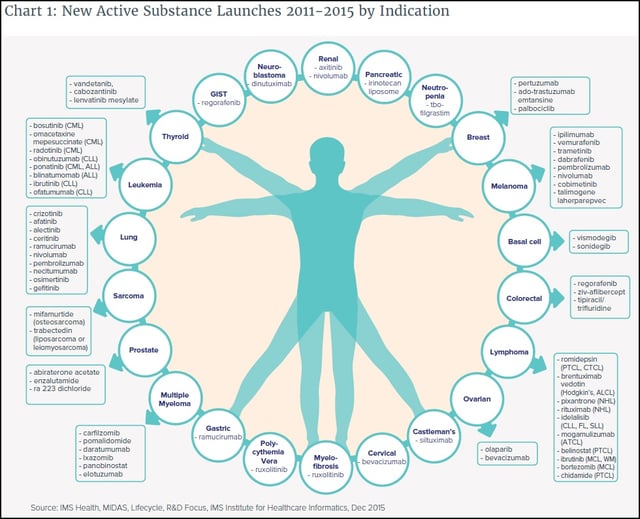 Here is a look at two key themes of the cancer care market up for discussion at ASCO this weekend.

This recently coined phrase alludes to the hidden side effects of cancer treatment: the financial burden and associated fear and anxiety that high prices places on patients. In its May 2016 publication, Global Oncology Trend Report: A Review of 2015 and Outlook to 2020, IMS Health reports that the personal financial responsibility for patients with commercial insurance ranged from an average of $3,000 a year for oral medicines to over $7,000 for injectable or infused drugs. Approximately 25% of patients had access to a discount of some type from the manufacturer, but the average amount of the discount is only $750 per retail prescription. With prescription drug prices as a whole dominating the national conversation during the entirety of the last presidency, it is expected to garner much attention this weekend as well.

The IMS Health report emphasizes “a strong pipeline of clinically distinctive therapies” expected to reach patients over the next five years. More specifically, there are 586 drug candidates currently in mid- to late-stage development, being advanced by over 500 different companies. This represents an increase of 63% in the number of drugs in the pipeline in the last decade, as shown in the below figure from IMS Health. The bulk of current R&D is focused on targeted agents that selectively target, or inhibit, the cell processes on tumor cells contributing to tumor growth and proliferation. The products may also include immunotherapy approaches that stimulate the patient’s own immune response against cancer cells. Immunotherapy is expected to be one of the fastest-growing areas in oncology R&D going forward, as is a shift toward oral formulations that can be sold from retail pharmacies as opposed to injection/infusion products that require a hospital or outpatient office visit. 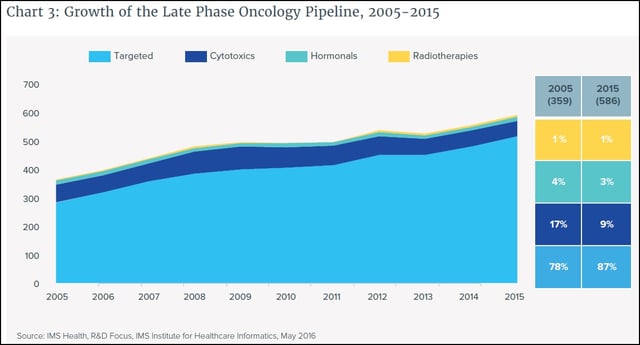 Also helping fuel the introduction of new therapies is a shortened regulatory timeline in the U.S. As part of the FDA’s drive to get much-needed treatments to patients, the agency is accelerating approval for medically important products under its “Breakthrough Therapy Designation.” Time to market (from patent filing to drug approval) for cancer drugs is currently about 9.5 years, down from 10.25 years in the past.