"The Smart Money is Heading Outside the U.S." - CNBC

In a surprising Citigroup quarterly poll among institutional investors (discussed this morning by CNBC), respondents indicated that both Europe and Asia-Pacific outranked the U.S. for the most-favored class of equities going into 2014. In the face of a possible U.S. debt default and rocky government activities, this might not seem like news but Tobias Levkovich, Citi’s chief market strategist, stated that “This focus on Europe was fascinating in that this was the first time in the quarterly poll that such results were registered.” Importantly, big investors still have a largely positive outlook on U.S. stocks, with over 50% of survey respondents expecting the S&P 500 to close above 1,800 by the end of the year; however, they expect the most growth in 2014 to come from overseas markets.

A major impetus for investing globally in the coming year is the belief that U.S. corporate earnings estimates for 2014 are overvalued. To this end, surveyed investors postulated that actual corporate earnings increases will be roughly 6.6% versus the 14% currently forecast, according to CNBC. Illustrating this belief, global ETFs are now seeing a much larger influx of capital than U.S. funds, and the majority of institutional investors in the Citi poll expect small caps to outperform now.

The anticipated slowdown in U.S. growth can be seen in the pharmaceutical industry as well, as Big Pharma is increasingly looking to emerging markets for its future revenues. Asia-Pacific for one represents a region with an emerging middle class (over 525 million people considered “middle class” to date) leading to increasing consumer demand for new medical technologies that can remedy the burden of chronic diseases. At the same time, pharma companies in the U.S. have been facing numerous patent expirations for their blockbuster treatments and have welcomed the opportunity to expand into new markets where demand for prescription drugs is on the rise and patents are still in effect. Accordingly, IndustryWeek reported in June 2013 that emerging markets were likely to account for 30% of global pharmaceutical spending by 2016. 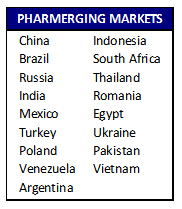 From a focus on growth opportunities in just the BRIC countries (Brazil, Russia, India, and China) a few short years ago, IMS Health now identifies 17 “pharmerging” markets characterized by rapid global pharmaceutical sales growth. Drug Discovery & Development writes that “Pharmaceutical sales in these markets [listed in the table to the right] will grow by at least 12% annually, increasing by more than $150 billion to $345 billion in 2016 from $194 billion in 2011 as millions more people gain access to basic medicines.” In comparison, pharma sales in the U.S. are set to grow by little more than 1% annually through 2016.