Neonode Inc. (NEON-NASDAQ), a company that specializes in touch-sensing technologies for electronic devices, continues to improve its proprietary platform technology while expanding its potential applications. The Company’s patented MultiSensing® Technology enables users to interact with electronic devices by touching areas on a screen. Neonode’s technology recognizes any object (e.g., finger, stylus) and supports multiple touches on the screen simultaneously. It can sense an object’s size, pressure on a surface, depth, velocity, or proximity to the screen’s surface.

Last week, Neonode announced the release of its second-generation high-performance multisensing controller, NN1002, which is used to control the operation of optical touchscreens on various devices. The Company reports that the fully integrated controller builds on the Company’s first-generation optical touch controller—the NN1001—which boasts ultra-low-power use and is comprised of a single chip. Both the NN1001 and NN1002 models were developed in collaboration with Texas Instruments.

NN1002 was created to improve the performance, cost, and functionality of touch systems. The chip allows manufacturers to produce touchscreens that have high optical clarity and are lightweight. The chip is designed for use in mobile phones, tablets and e-readers, toys and gaming consoles, printers, white goods (e.g., refrigerators, washing machines), wearable goods (e.g., watches, exercise bracelets), automotive infotainment systems, and PCs, among other applications with touchscreens. Improving upon its predecessor (the NN1001), the NN1002 can also be used on larger screens, including those found on notebooks and monitors, and has even lower power requirements.

Additional features in the NN1002 chip include a self-scanning mode that enables the device to transition to “sleep mode” until a touch or proximity event occurs. Neonode reports that its chip removes the need for an external microcontroller and other components (e.g., such as white/visible LED-drivers and I/O port extender), potentially lowering costs for OEMs.

Neonode operates via a technology licensing model where revenues are primarily generated through non-exclusive, royalty-based licenses to original equipment manufacturers (OEMs), original design manufacturers (ODMs), and component suppliers. MultiSensing® has been employed in a Kindle Touch eReader from Amazon.com, Inc., the Nook eReader from Barnes & Noble, Inc., eReaders from Sony Corp. and Kobo Inc., and the MEEP! tablet from Oregon Scientific Inc.

Although never formally announced, Neonode’s technology also appears to be included in LeapFrog's New LeapPad Ultra. Not only is the LeapPad Ultra is featured prominently on Neonode’s homepage (shown in the screenshot below), this possibility was speculated in a Seeking Alpha article in June and followed shortly after Neonode's May 2013 announcement, which described a license agreement with “a high-volume children’s tablet from an undisclosed tier-one OEM." 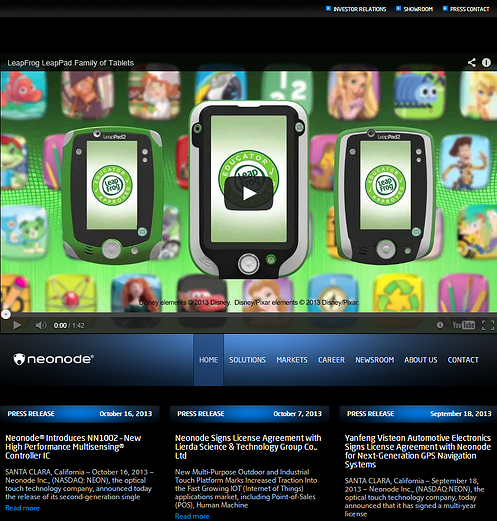