Today Pressure BioSciences, Inc. (PBIO-OTC) announced a relationship with IssuWorks, a company that strives to provide services and technology to improve capital formation, distribution, and aftermarket results for issuers, investors, and investment banks. Pressure BioSciences has retained IssuWorks and its management team to review the Company’s strategic and financing alternatives, including the possible spin-off of vertical market applications into new, stand-alone businesses.

END_OF_DOCUMENT_TOKEN_TO_BE_REPLACED 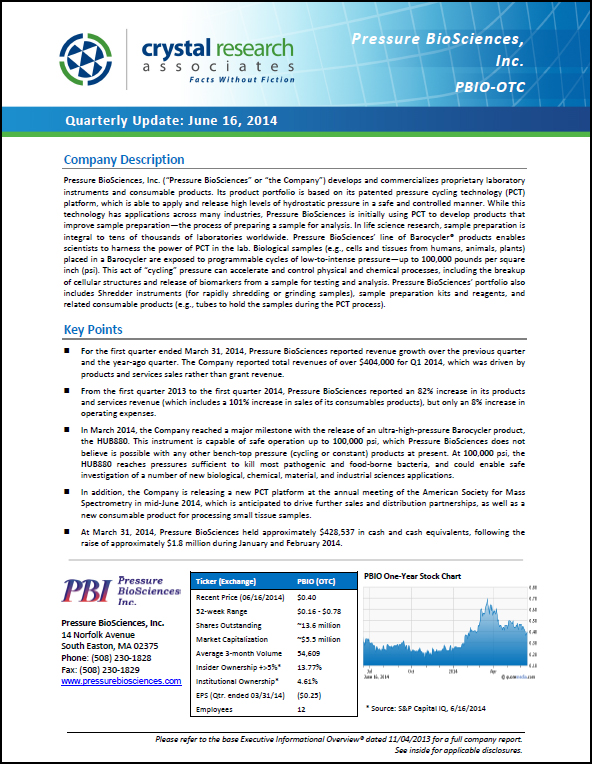 This afternoon, we published an update on Pressure BioSciences, Inc. (PBIO-OTC), a company focused on the development and commercialization of proprietary laboratory instruments and consumable products. The update covers the company's most recently reported financial results for the first quarter 2014 and highlights from fiscal year 2013, as well as describes new product introductions, including a new pressure cycling technology (PCT) platform being introduced this week at the annual meeting of the American Society for Mass Spectrometry.

END_OF_DOCUMENT_TOKEN_TO_BE_REPLACED

A 12-page Quarterly Update on Boston Therapeutics, Inc. (BTHE-OTC) is now available here. The update covers the company's news and developments since the publication of a 60-page Executive Informational Overview in March.