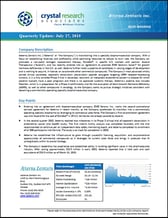 We published a 12-page Quarterly Update on specialty biopharmaceutical company Aeterna Zentaris, Inc. this morning. The report updates readers on Aeterna's news, milestones, and clinical and commercial development status since the publication of our base report, the Executive Informational Overview from April 2015.

With a focus on establishing revenues and profitability while optimizing resources to reduce its burn rate, Aeterna co-promotes a non-patch estrogen replacement therapy, EstroGel®, in specific U.S. markets with partner, Ascend Therapeutics (“Ascend”), and has recently entered into an agreement to promote EMD Serono’s Saizen® for growth hormone deficiencies in the U.S. as well. Aeterna further holds a pipeline of candidates in varying stages of development and is working to acquire, in-license, or co-promote other commercial compounds. The Company’s most advanced wholly owned clinical candidate, zoptarelin doxorubicin (doxorubicin peptide conjugate targeting LHRH receptor–expressing tumors), is in a fully enrolled Phase 3 trial in advanced, recurrent, or metastatic endometrial cancer—a disease for which patients typically have a poor prognosis and there is no approved systemic therapy. Aeterna’s pipeline also includes Macrilen, which is in preparation for a Phase 3 confirmatory trial for the evaluation of Adult Growth Hormone Deficiency (AGHD), as well as other compounds in oncology, as the Company works to pursue strategic initiatives consistent with becoming a commercially operating specialty biopharmaceutical company.

Key Points from the Quarterly Update