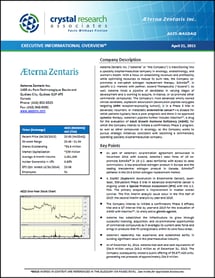 Aeterna Zentaris (“Aeterna” or “the Company”) is transitioning into a specialty biopharmaceutical company in oncology, endocrinology, and women’s health. With a focus on establishing revenues and profitability while optimizing resources to reduce its burn rate, the Company co-promotes a non-patch estrogen replacement therapy, EstroGel®, in specific U.S. markets with partner, Ascend Therapeutics (“Ascend”). As well, Aeterna holds a pipeline of candidates in varying stages of development and is working to acquire, in-license, or co-promote other commercial compounds.

The Company’s most advanced wholly owned clinical candidate, zoptarelin doxorubicin (doxorubicin peptide conjugate targeting LHRH receptor–expressing tumors), is in a Phase 3 trial in advanced, recurrent, or metastatic endometrial cancer—a disease for which patients typically have a poor prognosis and there is no approved systemic therapy. Aeterna’s pipeline further includes Macrilen™, a drug for the evaluation of Adult Growth Hormone Deficiency (AGHD), for which the Company intends to initiate a confirmatory Phase 3 program, as well as other compounds in oncology, as the Company works to pursue strategic initiatives consistent with becoming a commercially operating specialty biopharmaceutical company.