The Company's CSS, which is a novel de 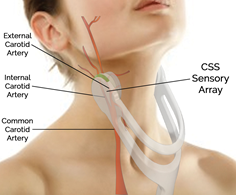 vice that uses patented sound wave analysis technology to detect and measure carotid arterial stenosis, fits within the criteria of this FDA filing. Due to U.S. government shutdown, the submission will be reviewed by the FDA upon resumption of government activity.